INCOME INEQUALITY – DOES IT MATTER?

Income inequality is much in the news. Democratic politicians are decrying it and economists have discovered it. Both groups have been given ammunition by the recent work of economists Emmanuel Saez of the University of California, Berkeley and Thomas Piketty of the Paris School of Economics. Piketty’s book, Capital in the 21st Century, recently translated into English, sits near the top of the best-seller list. Saez and Piketty claim to prove, through an examination of IRS records, that income inequality in the United States has widened dramatically in the last thirty years and has reached a peak unseen since 1927. Others have pointed out that most of the gains in wealth over the last thirty years, and especially over the last six years, have gone to the top 1% of Americans. What happened? Is this a problem? And, if so, what can be done about it?

Analyses of income and wealth trends in the United States tend to focus on four developments: technology, globalization, financialization and taxes. Advances in technology and globalization have certainly caused dislocations in labor markets. American workers, right up through middle class employees, have increasingly had to compete with both digital technology and lower-wage workers outside the United States. Downward pressure on wages has been profound. While technology and globalization have kept the middle and lower classes down, financialization and reductions in tax rates have helped propel the managerial and professional classes up. Financialization, which refers to the increasing importance of financial markets in the US economy, has enriched those associated with banking and money management and those who own financial assets. Since the 1980’s, tax rates have been significantly reduced at the upper end, allowing those with high incomes to retain more of their wealth and so to multiply it. Thus, the spread widens. 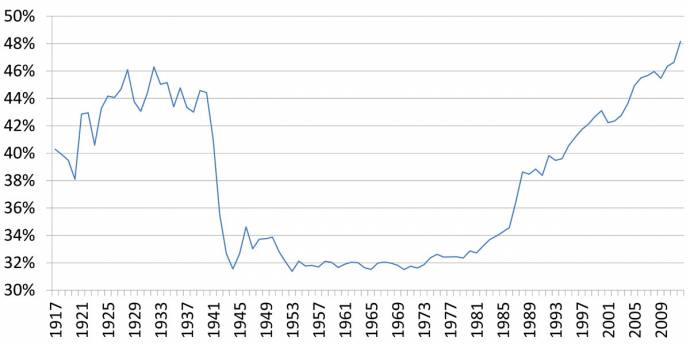 It may seem odd to ask whether increasing income inequality is a problem — of course it is, if you are on the bottom. That is, unless you believe that technology advances and globalization are inevitable, unstoppable forces and only the exertions and successes of those at the top have kept our economy competitive and prevented the situation from being much worse. In which case, we are content to let the rich get richer, as long as they are creating jobs for the rest of us. This is the point of view of the Republican party.

The Republicans may have a point. And yet, the increasing concentration of wealth at the top must be disquieting. One can detect a number of serious economic, social and political problems. From an economic point of view, we can see that the rising tide of income washing over our top earners is to some extent unspent. Rich people can only purchase so many houses and cars. A large percentage of their income is saved and invested in the global capital markets. Are these savings reinvested in American businesses that create new jobs? It doesn’t seem so. For one thing, American businesses are loath to invest when demand remains so low. And so, a vicious circle exists.

Socially, our lower and middle classes haven’t had a raise in twenty or thirty years. To keep up, they’ve taken extra jobs, worked longer hours and maxed out on their credit cards and home equity. Now, they’re out of options. Social unrest is a possibility. Politically, one can already see trouble coming. The rich now dominate campaign funding as never before and are in a position to control government policy to their benefit. The lower and middle classes will not sit still either, as the recent successes of the new right-wing and anti-EU parties in Europe have demonstrated.

What should be done? Let’s start by listing the things we don’t want to do: we don’t want to suppress technological innovation; we don’t want to wall ourselves off from global competition; we don’t want to increase the size of a redistributive government; we don’t want to create incentives for people to stop looking for work and to seek government support. What does that leave? Taxes, infrastructure spending, reform of the financial system, regulatory reform more broadly. None of these items are remotely likely to be addressed in the current political climate. Look for more concentration of income and wealth at the top and more political gridlock. Meanwhile, social pressures will build.

(1) Source: Piketty, Thomas and Saez, Emmanuel (2007). Income and Wage Inequality in the United States 1913-2002; in Atkinson, A. B. and Piketty, T. (editors) Top Incomes over the Twentieth Century. A Contrast Between Continental European and English-Speaking Countries, Oxford University Press, chapter 5.