Posted by Samuel Rossoff on Sunday, December 07, 2014 in Points of View

Few issues will impact the tech industry more over the next several years than the controversy over net neutrality. Simply defined, net neutrality is the regulatory requirement that internet providers must treat all internet traffic equally – like telephone calls over our telephone lines. No internet content may be given preferential treatment. President Obama came out in favor of net neutrality last summer, while the FCC, under its commissioner Tom Wheeler, has come out against it--sort of. What is net neutrality and how did it become such a key issue? Perhaps a little history is in order.

The internet started as a project to unify a series of digital networks that had been constructed to connect ARPA (the Defense Department tech agency, later called DARPA) with System Development Corporation in Santa Monica, California, UC Berkeley and MIT. Originally, there were three networks (one from each partner to ARPA) and the agency became interested in unifying this system into a single network. Traditional telecommunications requires a complete end-to-end circuit between the caller and receiver, but ARPA sought to redesign this model for the internet, allowing any number of participants to proceed down a single circuit, even if they weren’t talking to each other. In the 1990s this innovation exploded into a massive world-spanning network, where user connections were supported by Internet Service Providers (which we know as ISPs).

To be an ISP you only need two things: computing power to establish and route connections, and a medium (or circuit) to transmit them. Given that there is an enormous barrier to entry for laying circuits (then over copper, and now over fiber), the FCC passed the Telecommunications Act of 1996, which forced major circuit owners to lease their circuits to Competitive Local Exchange Carriers (CLECs), which made up the ISPs of the time. To start an ISP you no longer had to dig holes and lay wire, you could just buy circuits from AT&T. All you needed was a bank of computers somewhere. From 1996 to 2003 (during the time we saw the growth of Amazon, Google, Yahoo, and others) enormously competitive market forces gave rise to a flood of internet offerings. In extreme cases companies attempted to offer free internet (subsidized by advertising). This may have contributed to a bust in the market in 2000-2001.

The Rise of Net Neutrality

Today, most Americans have very little choice in internet providers and most of the available providers offer very low-speed service. 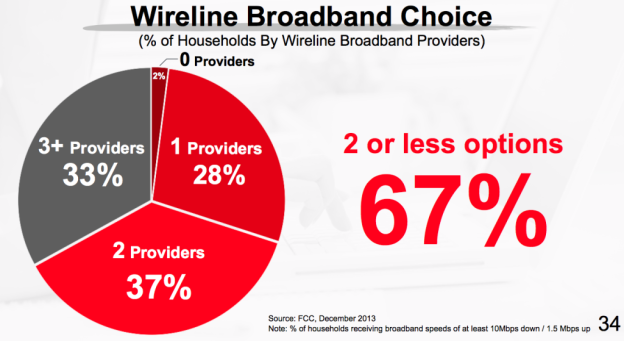 So what happened in the last decade to take us from a situation where we had so many choices that market went bust to so very few choices? In 2004, the US Supreme Court struck down (by denying an appeal on USTA vs FCC) major provisions of the Telecommunications Act of 1996. In particular, the Court voided the requirement that Incumbent network providers be forced to lease circuits to new entrants into the market who might be their competitors. As a result, the majority of the ISPs of the day got bought up and consolidated into a much smaller number of providers. The FCC, in response to this development, began requiring Network Neutrality -- data on the circuit cannot be inspected or subject to limitations based on source or destination.

Between 2004 (even before USTA vs FCC was denied) and 2010, the FCC attempted to enforce Network Neutrality on what it deemed are "Information Services," which included internet Cable providers and (starting in 2005) DSL providers. Madison River Communications was forced to allow Voice Over IP on its networks. Comcast was fined for blocking BitTorrent (a file transfer service frequently used for Piracy). However, the FCCs 2008 Cease and Desist order to Comcast over BitTorrent was struck down in 2010 when the US Court of Appeal for the District of Columbia ruled that the FCC was not granted the authority, from Congress, to regulate "Information Services" in this way. In response, the FCC passed the FCC Open Internet Order 2010, explicitly requiring Network Neutrality for all "Information Services." This was again struck down in 2014 in Verizon vs FCC, where it was ruled that the FCC could not regulate Network Neutrality on "Information Services" at all. Many people (including President Obama) have responded by suggesting that the FCC reclassify these services as "Title II" which it explicitly does have the authority to regulate in this way.