Posted by Mack Rossoff on Tuesday, April 19, 2016 in Points of View

The Three "I" Issues

If you are following the 2016 election closely—as I am—you might wonder if there are any issues at stake. Most of the commentary among political pundits seems to be about personalities and temperament. We hear a lot about how Trump voters are angry or Sanders voters are idealists. The Establishment candidates (Hillary and Kasich) stick to their party lines: Supreme Court nominees, paid family leave, equal pay for women for Democrats and lower taxes, less regulation, repeal of Obamacare for Republicans. Regarding foreign policy, the Establishment candidates, left and right, are pretty much in agreement. These party lines rarely resonate with the voters, and Establishment candidates consistently fail to raise substantial crowds to attend their speeches. But there are important issues being raised and largely voiced by the “Change” candidates: Sanders, Trump and, sometimes, Cruz, and there are plenty of voters responding. About 45% of the voters in the Democratic primaries have voted for Sanders and nearly 80% of the voters in the Republican primaries have voted for Trump or Cruz. The Change candidates echo some common themes, which we night call the three “I”s: imports, immigration and intervention.

Perhaps the most prominent issue addressed by the Change candidates is import (or, trade) policy. Sanders, Trump and Cruz all decry trade agreements we have joined over the last thirty years and blame them for the destruction of America’s industrial base and the loss of manufacturing jobs. They all oppose Obama’s Trans-Pacific Partnership and claim they would renegotiate NAFTA and other tariff-reducing agreements. Trump criticizes currency manipulation by the Chinese and Japanese and threatens tariffs of as much as 45% on goods coming from countries that don’t practice his version of “fair trade.”

Free trade has been a pillar of policy in both parties for decades and counts frequent foes Obama and Paul Ryan among its supporters. But many voters are turning against free trade. Trade has been a major issue in American political history since the early days of the Republic and the lineup has been pretty consistent: manufacturers want trade protection and financiers want free trade. The lineup is the same today and, for some time, the financiers have been in the ascendancy. The US trade deficit equaled $531 billion in 2015 and has amounted to a staggering $8.6 trillion over the last 16 years.

The second issue—immigration—is the pivotal issue for Trump, a crucial issue for Cruz and less important for Sanders (who has adopted a standard pro-immigrant Democratic position). As recently as 2007, however, Sanders spoke out in favor of limiting immigration, claiming that immigrants were restricting wages for working class Americans. Sanders called the issue “the other side of the trade issue.”. Like trade, immigration has been a recurring political issue in American politics and, as Sanders pointed out, a companion to the trade issue. Americans who rely on US production for their livelihoods wish to limit competition from foreign workers whether they exist abroad (trade) or move to the US (immigration). As the chart below demonstrates, the percentage of immigrants in the work force in the US (legal and illegal) is at a high since 1900 and forecast to go much higher. 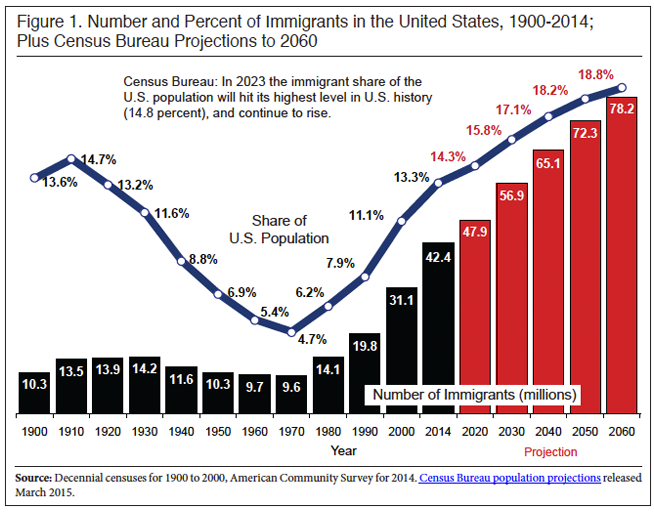 The three Change candidates find common ground on the final issue: intervention. All claim that our interventions in Iraq and Libya were catastrophic mistakes and oppose deeper involvement in Syria—if that means attacking the Assad government forces. This foreign policy discussion has a tendency to drift toward another “I”: isolationism. Trump hints at a withdrawal from NATO and Sanders wants to significantly cut the defense budget.

The intervention debate connects with the other two “I”s in indirect ways. Free traders and open border advocates are internationalists, believing that the free flow of goods and people will maximize global peace and prosperity. A strong US military, willing to intervene abroad, underwrites this system. The Change candidates don’t buy any of this and place their focus almost entirely on measures that will directly enhance the wellbeing of the US. You can see this emphasis in Trump’s call for “America First,” Cruz’s devotion to the American Constitution and Sanders’ moving “America” ad.

The Change candidates are tapping into a popular revolt against stagnating wages and a low job participation rate in the face of blatant displays of growing wealth in the financial and corporate communities. These urges are felt most strongly in the white middle and working classes, likely because they continue to seethe over what they lost in 2008. The three “I”s are a cluster of self-reinforcing issues that lay the blame for our current economic malaise on an internationalist Establishment that has pursued its own interests regardless of the impact on the American working and middle classes. The 2016 election will likely be fought between Clinton, the Establishment Democrat, and Trump, the populist Republican. Trump, like so many populist crusaders in American history (William Jennings Bryan, George Wallace, Pat Buchanan) has an outrageous personality and flawed platform. But the populists have a tendency to pave the way for more balanced reformers (Woodrow Wilson, Franklin Roosevelt). Change may be coming—in 2020 or 2024.